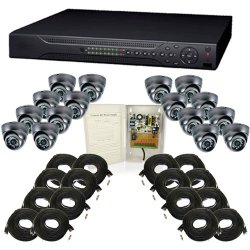 A typical security camera system consists of one or more cameras, a processor, a monitor and a digital video recorder or DVR. The cameras can produce high quality video in bright to very little or no light conditions. These cameras can be monitored for live coverage, so if in fact a crime was in progress, a security camera system in south Florida could indeed be used to stop it. However, in addition to live monitoring, the DVR allows for the video to be taped so that it can be viewed at a later time as well.

Since the video footage can be taped, it can be also be copied or written to portable storage media and given to the police or used as evidence if necessary. With the proper equipment and security camera system, the cameras can even track and zoom in on moving objects and individuals. This can be a powerful deterrent to potential violators or vandals.

One of the most frequent areas where random acts of crime occur in south Florida is parking lots. Miami, Dade, Palm Beach, Broward, Pompano Beach, Deerfield Beach, Boynton Beach, West Palm Beach, Boca Raton, and Ft. Lauderdale have all suffered repeated criminal acts that have occurred in parking lots. In addition, many of these parking areas employed security guards. However, with out the proper monitoring system their ability to stop or prevent incidences were greatly reduced.

According to a 2008 article in the Sun-Sentinel most southern Florida malls don’t even have security camera systems in their parking lots yielding a rate of 83% of unrecorded or undocumented mall parking lot crimes.

Of course, acts of crime, vandalism and violence occur in many other areas besides parking lots. Retail stores, banks, businesses, schools, industries, and homes are just a few of the locations where criminal activities take place. All these locations could realize the benefit by the use of a security camera system in south Florida.

According to the Miami Herald Newspaper which serves the Miami-Dade, Broward, and greater Florida areas, four southern Florida areas ranked within the top 100 crime rankings. Based on a post by the Miami Herald on November 26, 2009, Miami Beach ranked 42, Miami ranked 45, West Palm Beach ranked 53, and Fort Lauderdale ranked 77. These rates include all categories of crime including burglary, larceny, and vehicle theft; crimes which could benefit most by a security camera system in south Florida.