December 27, 2012 10:46 am Published by Techpro Security Products Leave your thoughts 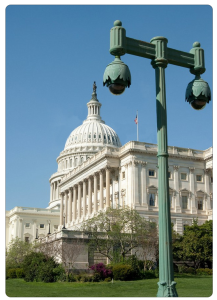 If you are shopping for a surveillance system for a government building, you might be unsure of what to purchase. Obviously, a small and inexpensive system that you would use for home use probably won’t be sufficient for a large government building, but there are systems out there that don’t cost an arm and a leg and that are more than sufficient for government use. It might take a little bit of price shopping and comparing to find the best system for the best deal, but there are great options out there. Also, remember that safety and security are essential, especially in a government building, and it is typically worthwhile to spend a little more on a good system than to try to get by with a system that doesn’t provide adequate security.

Why are Surveillance Systems a Necessity for Government Buildings?

All sorts of business and activities are taken care of in government buildings, and those who are in these buildings on a daily basis could be in serious danger if no security-related precautions are taken. This type of security is important at any level of government, from police departments to courthouses and everything in between.

What Do the Best Surveillance Systems for Government Buildings Entail?

Different government offices and buildings have different security-related needs, so you can’t expect to see the exact same type of surveillance system in every government building that you enter. For instance, a military building will obviously have greater security than a post office. There are some components that you can expect to see in almost any government-related security camera system, however.

For instance, surveillance cameras are a crucial part of any type of security system, and this is especially true for government buildings. The inside of each building should be under careful surveillance at all times, and various security cameras should be hung throughout the building. It can be easy to create blind spots if you aren’t careful when installing security cameras, but it is imperative to reduce or eliminate blind spots as much as possible in a government building. It only takes one small corner that isn’t being watched for someone to pull some sort of stunt, but there is less to worry about when the entire government building is under careful surveillance.

Along With the Best Surveillance Systems for Government Buildings, What Other Precautions Can Be Taken?

Hiring a security team is typically a good idea, especially for larger government buildings. A security team can keep a constant, close eye on surveillance footage, and they can look for suspicious behavior as it happens; this can help cut down on crime and keep people safe in a government building. Along with watching the surveillance footage, security personnel can patrol the grounds; creating a strong presence can help deter crime, and experienced professionals will be available to handle situations as they arise.

The use of metal detectors is also strongly encouraged for many government buildings, especially in court houses and other similar places. With the use of metal detectors, security personnel can cut down on dangerous weapons and other items that make their way into the court house, which will increase safety and security for everyone who enters the building each day.

Utilizing a burglar alarm can also help prevent events from happening after-hours. Ample lighting both inside and outside the government building, gates and fences and other security measures can also be taken in order to maximize security.

Figuring out the best surveillance systems for government buildings can be quite overwhelming if you have no experience, but talking to a security professional is a great way to assess what you need and purchase all of the necessary security-related equipment. Contact us today for more information.